I originally wrote this blog on September 18, 2008 on a completely different site – and I thought I had transfered it to wordpress… but I guess not.  So here it is (again?).

I realize it would take way too much organization to lay all this stuff out properly and logically, so I’m just gonna throw stuff into the blog as I get it.   Today I’m sharing some photos and memories about another National Sales Meeting of the Walt Disney Music Co.  As I mentioned last time, we had a big hit with Mickey Mouse Disco.  Even though our WDW trip was in 1983, MMD was actually released back in 1979.  It sold great.  In fact it was the Best Selling Children’s Album two years running… even though NARM (National Association of Recording Merchandisers) never gave us the award for that honor.  (How do they vote on sales figures??? That’s like voting on the height of the tallest mountain.) 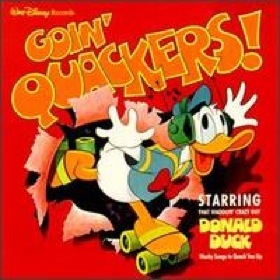 Anyway, we didn’t rest on our laurels.  In 1980 we released three terrific albums for kids.  Namely, “Goin’ Quackers,” “Pardners,” and “Yankee Doodle Mickey.”  I’m assuming that the picnic was in 1980 to coincide with the albums’ release.  Naturally, the theme was Western to go along with the “Pardners” album.

The picnic was on the Disney Studios backlot.   In fact we were set up in the backyards of two famous Disney houses.  One was the Victorian House from “The Shaggy Dog” (among countless other shows), and the other was the house from “That Darn Cat.”  It was a barbecue set-up, and all the Music Company employees attended.

Afterward, we had some live entertainment.  Willio & Phillio (the backbone of “Goin’ Quackers”) sang a few songs.  In the photo above you can see the Sales Team joining in with kazoos.  (“I’m goin’ quackers <QUACK, QUACK, QUACK> and you can come along!”)  In the semi-circle are (l to r) Sandy Beach, unknown, Eddy Medora (probably), Gary Krisel, Ron Roberg, Bill Rudolph, & Bob Pavlacka.  Also in the crowd are Willio and Phillio (in hats), Vera Wolski (in red), and, yes, that nose on the left side of the photo is me.

Here’s a better picture of the Sales Team.  (l to r)  Ron Roberg, Gary Krisel, Bob Pavlacka, Sandy Beach, ????, Bill Rudolph, and ????.  That’s me and Eddy Medora in front.  The cowboy hats were a gift to all of us from the Mouse.  (Well, the Music Company coffers, actually.)

Anyway, a good time was had by all.

Ah, here are the other two covers to those three albums.

As always, if anyone can fill in the blanks (by identifying people in the photos or whatever), please contact me!